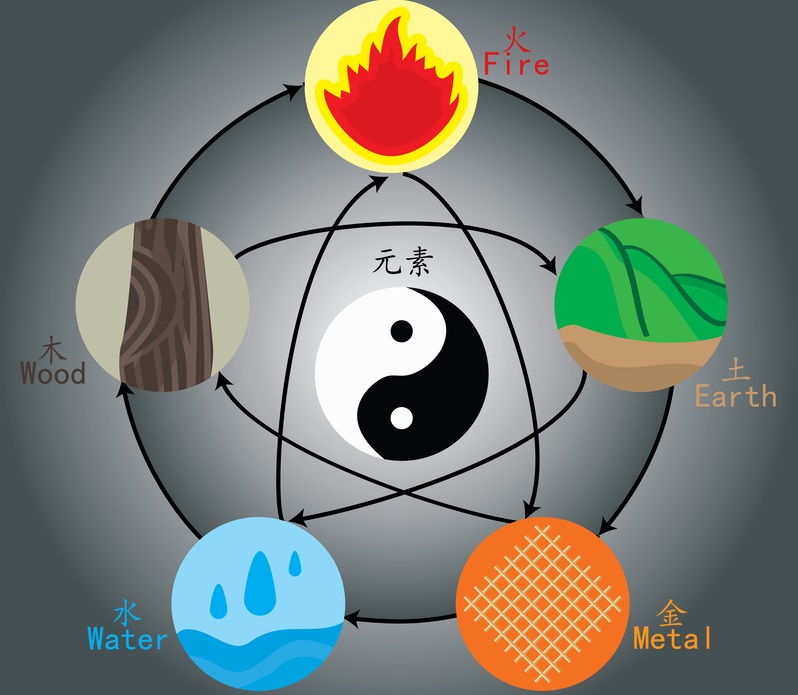 Law of Five Elements According to Chinese Medicine

With thousands of years of practical application, Chinese medicine is a poetic and effective healing modality that follows the rhythms of nature and seasonal progressions. The Water Element is deep and mysterious, representing birth and death and the winter season; water nourishes the Wood Element signifying spring and growth; wood fuels the Fire Element allowing for fruition; the fire, like molten lava, produces the Earth Element that nourishes all things; the earth contains veins of minerals representing the Metal Element and the accumulation of riches gained throughout our lives; mineral veins run along the streams that lead to the great mysterious ocean, and back to the mystery of the Water Element and birth and death.

The Law of Five Elements states that every human being has a 'causative factor'; your causative factor is determined in utero or in the first few months of life and was possibly determined by the first strong emotional experience that you had. Throughout your life, this causative factor defines your personality and determines your health in very distinctive ways. In Chinese medicine, the body-mind-spirit are conjoined, and cannot be considered separately.

Absolutely determining your causative factor requires a trip to an acupuncturist trained in Worsley Five Element Traditional Acupuncture, but you may find that one specific Element cries out to you. Conditions developed in childhood, or your most chronic ailments will also be very telling as you go through the Elements. While the term "Five Element" has been coined in the West, it can be more accurately described as "Five Phases" because of the fluid and ongoing transformational interaction between the Five Elements; the word "element" suggests a static entity, whereas this is actually an ever changing and evolving interplay.

All of us have all five elements contained within us: when one Organ is affected all other Organ Systems will be affected eventually, so the more chronic your condition, the more symptoms you will have. Determining the causative factor helps to treat the original insult to the body and to treat the core issue that has lead to disease and disharmony. It is believed that if you address the causative factor, all other organ systems will also come in to balance.

Relationships Between the Five Elements

The five elements are a practical way to reflect on the natural cycles represented in the great ecosystems of nature, or the micro-system of your body. All of the reasoning, concepts, and theories of The Five Elements reflect a greater universal truth and the Tao:

The clockwise sequence with a pentagon representing the controlling links between the Elements the is how the Element control one another. Water can extinguish Fire, Fire can melt Metal, Metal can cut Wood, Wood can contain Earth, and Earth can absorb Water. This is one more way that disease patterns can be diagnosed in Chinese medicine; it also shows how when one organ system becomes imbalanced, all other systems will eventually be impacted.

The Mind in Five Element Theory

In Chinese medicine, there is not distinction between mind and body, as they are a unified entity. The mind manifests itself uniquely through each of the Five Element Systems:

In Five Element Theory, each Organ system has an effect on the other Organ systems when it becomes imbalanced. These functions are not based on surgical discoveries, but on clinical observation of patients over many thousands of years.

Liao S.J. The origin of the five elements in the traditional theorem of acupuncture: a preliminary brief historic enquiry. Acupunct Electrother Res. 1992;17:7–14. [